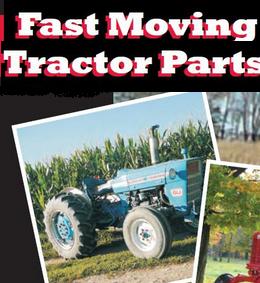 Get Free Parts Manual When Tractor Repair Tips is Requested

Promote Your Page Too

Deutz Tractors are referred to as Deutz, Deutz Fahr, and Deutz Allis. The different names convey the history of Deutz Tractors, its mergers and acquisitions from 1907 to today.

The first Deutz tractors can be attributed to Nikolaus Otto and Gottleib Daimler. They produced the first set of agricultural machinery beginning in 1907 and these tractors were very popular in Western Europe after World War II. Deutz Engines were almost characterized from the rest by its simple, reliable, and rugged air-cooled diesel engines. The air cooled design is different from its liquid cooled counterparts by design and less maintenance. There are no liquids to change, no water pump to fail, and no seals to change.

As part of its history, n 1984, the American tractor and implement manufacturer Allis-Chalmers was in a financial difficulty. A deal was signed and the company was sold to Deutz. This saw the Allis tractors being renamed to Deutz-Allis. Deutz Allis and began importing Deutz-Fahr tractors under the Deutz-Allis name, however, the bright orange of Allis Chalmers was switched to green. This bright orange color was re-instated in 1991, after the Deutz-Allis company was purchased by AGCO. The AGCO Allis name was dropped by AGCO in 2001.

The original Deutz Tractors were models like the 5505. This plain model system was continued with the Deutz-Allis tractors, like the DX 8.30 and the 7120.

Its transmission is synchromesh with thirty six (36) forward and twelve (12) reverse gears.  The standard tractor is a two wheel drive (2WD); however there is the option of the four wheel drive (4WD). Both rear and front axles will have replacement parts for the gears, planetary, axle shafts, u-joints, bearings and seals. The 13.750″ diaphragm style Pressure Plate can be rebuilt. If the non-functional pressure plate can be sent to the Ontario Parts Hotline Inc. it can be rebuilt to original specifications. This process normally takes 3-4 days, however, shipping time to and from the factory must be added in.

The independent PTO can either be the standard 540 rpm PTO, or the 1000 rpm PTO. PTO shafts, bearings and seals are sold as aftermarket.
Other parts for the DX 7.10 are wiper blades, rocker arm bushings, rocker arm seals, oil, air, fuel, and transmission filters.